I’m getting to this a bit late on the draw but I’m in the mood to post so here it is.

for this years wheat harvest I decided to try a heirloom variety of wheat called Red Fife.  According to wiki, it was imported into Canada sometime in the 1700’s by some polish immigrants.  It was a staple in Canada for many years before modern crossbreeding and engineering gave us better producing wheat that was more resistant to nature.   Some believe, however, that the new modern varieties have led to the much maligned gluten intolerance many suffer from today.  I’m not a 100% believer,  I eat modern bread and seem to be ok,  but since I like growing odd things,  I thought maybe a throwback would be fun.

I initially bought around 2(ish) pints, by volume, of seed, and planted about 2/3rds of it hoping it wouldn’t mind dense rows.  I guess at this point it goes without saying that we had an incredibly odd winter and so it’s not producing as well as I’d hoped.  The west third of my garden isn’t producing much at all.  I”m actually getting quite a bit of volunteer modern wheat growing there.  How can I tell you ask?  well check this out: 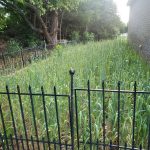 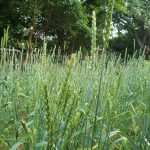 Look close.  The heirloom variety is “Beardless”….   I was shocked when I saw it.   Even more so, when it headed out, it was the same height as the volunteer modern wheat I got from dad.  I couldn’t for the life of me figure out why a third had beards and the other two thirds didn’t…   After the Red Fife headed out it also skyrocketed in height, growing 12-18″ over the last two weeks, where as the volunteer modern stuff stayed low like it usually does.

So let me talk for a minute about a couple terms I use.   When I say volunteer, I mean growth that I did not plant.  it’s not uncommon for lots of grain to fall out of the head when you harvest it.  In my case, since I cut it all by hand it’s almost a certainty.  Volunteer wheat won’t grow in rows, and generally doesn’t grow very high.  Probably cause it has to push through so much soil after being tilled.  In my case by a rototiller running about 8” deep.  For a modern farm, you almost always till the soil before you plant so that pretty much eliminates any volunteer by killing anything that was growing deep or just coming in.  then the stuff you plant can grow nicely in rows and dominate anything left over.   In my case, I must have waited too long between tilling and planting, so the volunteer had a chance to get established.

Another term I used was Heirloom.   This basically means it’s a variety of any plant that’s remained as close to the original cultivars as possible throughout time.  There are many plants that we domesticated back before we pooped in holes,  some we cross-bread to add or subtract traits as needed over the centuries.  Red Fife was one of these,  but since it became a staple in eastern Europe, and later in Canada, it’s remained relatively unchanged.  Today there are folk that specialize in growing pure stock of these older breeds, ensuring not to grow them in the same fields as prior varieties, even going so far as to leave fields fallow for years to ensure that they don’t accidentally cross-breed with volunteer modern varieties.  You can find heirlooms of almost any modern staple food,  and some are actually better tasting than the modern stuff.  I hear Red Fife is one of those.

The last thing is beards.  if you look at any picture of modern wheat, you’ll see it has spines that poke out of the head of wheat.  those are called beards.  they are serrated and like to stick to stuff like Velcro or those annoying little fuzzy stickers that are impossible to get out of your shoestrings….   For modern farmers the beards help the wheat thresh cleaner, so you can thresh faster.  the beardless varieties are a bit harder to get the wheat out of the head so you have to go slower.

Well,  as it turns out this years crop didn’t turn out very good.  Probably was the odd winter,  could of been some ground / nutrient issues. *shrug*   I’ll be working on it this winter I think.  Anyway,  we got a huge rain in early june that basically flattened what I had in the crop: 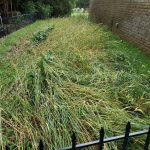 Some of it stood back up, but most of it didn’t.  It also took forever to ripen,  as of June 18th it was still green in spots…   So I cut it anyway cause there was rain in the forecast, and put the cuttings into buckets pointed in the proper direction to help facilitate ripening.  Picture Below: 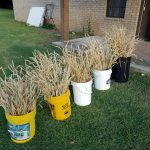 Yup, that’s ALL I managed to save,  pity really,  It hasn’t yet been thrashed but it’s looking like I’ll be lucky if I replace what I’ve sowed thus far.  Which was basically 2 pickle jars full of seed pictured below.   For what it’s worth,  there’s a ton of wheat stalks & heads in each of those buckets,  they’re all plum full & packed tightly to the point where I couldn’t pack anymore stalks into each bucket.  Probably more than what you’d normally bundle in fields by hand in the old days.  Still,  It’s not the mass of the plants, but how well the heads are filled out.. 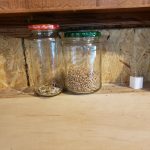 There’s still some seed left in the big jar, so I didn’t sow it all,  and I’m hopeful that I will be able to fill both jars back up and have a smidgen left over to grind into flour this year.  but not much,  maybe a cup or so if I’m lucky.   I’ll post the threshing results later.  The little jar has what I’ve managed to hand thresh waiting on it to ripen up all the way.  Basically just checking seed counts per head, which on the bigger heads is about 30 on average, and the smaller ones about 12…   Not fantastic, but not terrible either if it would have produced more heads.   Again I think I need to put some manure down, or potash… it had plenty of nitrogen as I used a bag on it last summer, and everything else is growing gang busters…  here are a few more pics, you can see that the harvested field is packed with greenery that was starting to take over… 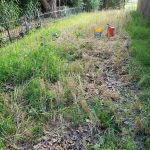 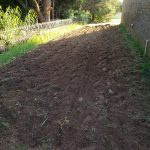 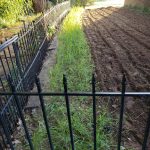 When I finished I still had energy and daylight so I mowed it flat and tilled it in.  I’ll leave it fallow over the summer, and maybe even the winter.  It depends on how that little green strip turns out (in pic 3) this fall.  Around the first of may I tilled up that strip of green as NOTHING was growing there, or nothing of merit anyway.  I then planted another 4 rows or so of the same Red Fife wheat, hoping that maybe it will grow better as a spring variety.  According to what I’ve read,  Red Fife can be planted in the fall as winter wheat, or in the spring as spring wheat…  Most modern varieties aren’t so flexible…  so hopefully in September or October I’ll have something else to harvest.   If it fairs better then I’ll probably let the garden go fallow all winter,  add manure, and plant again next spring for a full spring crop.

I’m committed to make this heirloom variety pay off,  i think it’s better for us, and believe I can eventually work out the kinks so we’ll have enough to replace store bought flour.   At some point anyway.  for now, it’s just a waiting game with some trial and error built in.  I’ll post up some pics and video of this springs threshing when I get to it this weekend,  and keep this post updated with the fall results as well.   so far the spring planting (as limited as it is), looks good.

OK, so next day…  I decided to go ahead and thresh tonight.  It wasn’t 100% ripe or dry, but dry enough to thresh.   I ended up with 2lb 14.4oz of seed total, or what appears to be at first glance a couple pickle jars full.  Not a lot, but about what I was expecting. 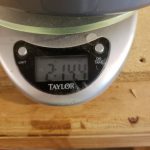 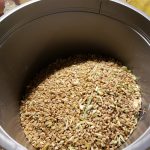 I captured most of the tailing and re threshed it and picked up an additional 4oz of grain from the first pass so I’m reasonably certain I got most of it.  So I guess it’s a success overall,  it did nearly double what I planted I think… maybe…  I’ll have to double check volumes once it drys out and I can store it in containers (have to keep the weevils out).   Have some video’s of the process below.  I’ll start a new post if I have anything to harvest this fall.