Friday night I decided to cut down my wheat before another thunderstorm could roll through.  Below are some pictures: 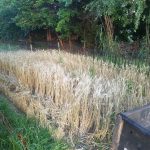 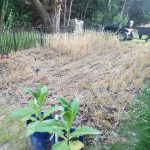 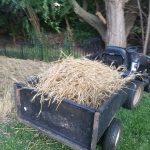 I only planted half the garden in wheat this year.  I think that’s been said in another post but it’s good to repeat it here.  From a mass point of view, I think it did well enough.  I think 2-3 wagon loads is usual when harvesting the whole plot, so I’m right at or just below average.  I’m going to try and have a video shot of me using the new Chinese threshing machine so look out for that later today. 🙂

here’s the video. I haven’t edited the audio out so you get to hear me talking to Addy.  The other two photo’s show the weight, 4lb 12oz, and a comparison to what I have left of last years harvest.  After the fact, it would appear that my yield was significantly less than last year.  since I planted half the plot, I should have had just over half a bucket, but I’m a bit shy of that. 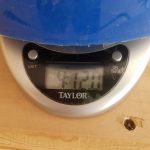 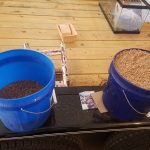 This will be the last year I grow modern wheat.  Starting next winter I’ll be growing a historical breed called “Red Fife”.  I have about 10oz of red fife now, so it will take a couple years to get enough seed to grow the whole plot.  But…  Since I have my indoor green house, I think I can grow year round and should be there quicker.  Should… *shrug*  I think I need around 2lb to seed the entire plot.  it’s always less than I expect it to be.  and I’ll be planting it thinner in the years to come as I think that may be why my yield was down.