So I think I finally have a Studio setup I can work with long term.   I’ll post some pictures of it below.

So I think the major catalyst for moving back into the original studio room was that I just didn’t have a good computer option for that small corner.  I have a really good laptop that travels with me to work every day to keep me out of trouble,  it’s more than good enough to record and master,  but having to set it up, plug everything in, and remember the device power up order was just too much hassle.   I have another laptop that used to be really good but has run into some issues,  it works,  but it’s super slow and tends to wig out a bit.   The only other option was my beast gaming system that I had moved down stairs a year or so ago so I could be closer to the family while gaming.

I considered dropping some cash on a new computer dedicated to recording, but with the recent Helix / Variax purchases I realized it was a bit much and I needed to make due with what I had.  So…   Bigger computer, bigger desk, needed a bigger room,  and well…  you get the new setup.  It’s not too different from the original studio setup,  except that I’ve streamlined the workflow and kept all the gear within a quick scoot of the chair away from me.  No more get up from the drums to hit record, then running back to the kit to make the 8 count…   Plus I added my keyboard to the mix now,  Which will hopefully help me figure out those tough melodies without having to get up and run to the other room.   And…  And…  All my guitars are within easy reach now. 🙂   Big plus.   Biggest negative is that I’m so far away from my family upstairs in the far room.   I will lament that in time I’m sure,  but I think it will be worth it in the end.  Now it’s time to get started kicking out some jams. 🙂 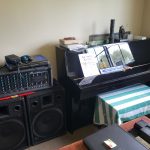 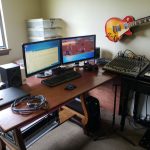 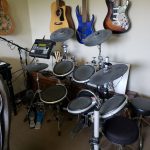 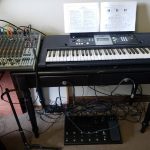